The Sports Photography of Bob Martin
WINNER: Illustrated Book of the Year at the Cross Sports Book Awards 2016 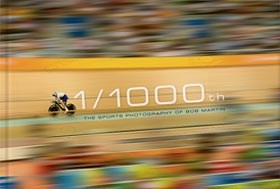 A spectacular retrospective showcasing the breathtaking pictures of world-renowned sports photographer, Bob Martin, in all their glory.

From his famous and iconic shot of a diver, arched in the air above the Barcelona skyline that became the seminal shot of the 1992 Olympics to his multi-award winning overhead photograph of a Paralympic swimmer leaving his prosthetic legs behind as he dives into the pool, the book features page after page of stunning, awe-inspiring pictures from the world’s greatest sporting events.

Beautifully printed on 240 expansive pages, 1/1000th presents a collection of images that encapsulate Bob Martin’s unique ability to capture sporting moments in a millisecond but always with a sense of place that embraces the context of a particular stadium, venue, event or occasion – be it an Olympics, a Wimbledon, a World Cup or a world title fight.

Beyond the photographs themselves, the book completes the picture by telling the stories behind how these amazing images were conceived, planned and finally executed, as well as providing fascinating technical insight into how they were taken.

"Bob Martin is recognised as one of the world's leading sports photographers."

Bob Martin is a multi-award winning sports photographer specialising in shooting action, graphic and editorial pictures for advertising, corporate and editorial clients. During a career spanning the last 30 years, he has photographed every major sporting event; from the last 13 Summer and Winter Olympics, to elephant polo and horse racing on ice.

His work has taken him to the farthest corners of the world, and his photographs have been published in numerous publications including Sports Illustrated, Time, Newsweek, Life Magazine, Stern, Paris Match, Bunte, L’Equipe, The Sunday Times and The New York Times to name just a few.

Bob Martin’s photography has been recognised by more than 60 national and international awards and he is a three-time winner of the prestigious British Sports Photographer of the Year award. In 2005 he won the World Press Photo Sports Picture of the Year.

Since 2005 Bob has coordinated the official photography for The Championships, Wimbledon. He was the Photo Chief for the London 2012 Olympics and is now a consultant to the International Olympic Committee and the Rio 2016 Olympics.